For my recent trip to India I had to keep the size and weight of my backpack low, so instead of a laptop, I simply took a HyperDrive Colorspace with me. My backup strategy was:

I carried all cards in my photo bag and left the HyperDrive in my backpack at the hotel. My reasoning was that it’s extremely improbable that something bad would happen simultaneously to my camera bag and to my backpack. And I kept two copies of each card onto the HyperDrive because drive sectors do go bad from time to time, and “double holds better.” The HyperDrive was my insurance, and like all insurances, you virtually never need it, but it’s still good to have it. I imagine that for some of you making backups might sound like too much hassle while using only one backup drive might sound too optimistic to others. To me it felt just right. 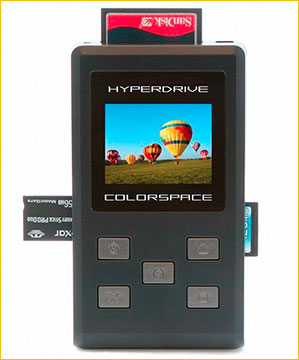 Anyhow, how did the HyperDrive Colorspace perform? Well — it performed not too bad and not too great. I bought it sight unseen, based on the “highly recommended” verdict by Michael Reichmann and numerous other positive recommendations posted onto various Internet forums. Maybe due to all the positive feedback I had my expectations set too high, but I was quite disappointed with the speed, convenience and display quality of the HyperDrive Colorspace. It might be that it’s better than all other external drives out there, maybe even a lot better, but the Canon 30D has a much better and larger display and display layout, much better controls for scrolling through the images and it’s at least 15 times faster when scrolling through the images.

And there are some further issues with the HyperDrive Colorspace:

In conclusion I’d say the following. If my camera had the capability to write onto two cards simultaneously, I’d probably just dump the HyperDrive and keep a set of cards in my photo bag and a set of backup-cards in the hotel. Furthermore, due to the slow operation and inconvenient controls, I used the HyperDrive simply as a hard drive and not as an image viewer, and for that kind of usage the unit is simply too expensive.

On the positive side, the user manual is written quite well.

← Back from India
Review of Mastering Black and White Digital Photography →

4 thoughts on “Review of HyperDrive Colorspace”