I’m deeply affected by the image Shadow Portrait by Karin Székessy.  I find it so intriguing and special, that I thought I’d write a critique of it.  My secret hope is that by searching for the right words and by analyzing why this image stirs up such a strong reaction inside me, I might gain a deeper understanding of it and ultimately be more likely to produce images with similar visual impact. 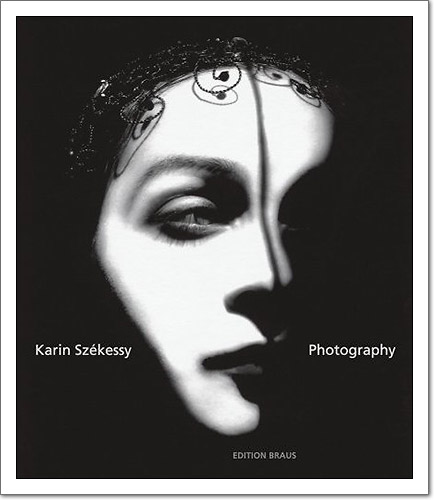 Let’s get the obvious stuff out of the way first.  We have before us a highly stylized black and white portrait.  The extraordinary lighting and the extreme contrast reveal only the most essential features of the model’s face: one eye, a forehead, one cheek, half a nose and half a mouth.  The highly graphical outline and the featureless white skin remind me very much of a skull or better yet, of a carnival mask — a thing devoid of life and emotion.  But the eye and the delicate curves of the lips, cheeks and nose are so full of life, so enigmatic and seductive that they easily overcome the idea of lifelessness.

Next I notice a further contradition — the highly detailed and intricately handcrafted hair-piece appears in total contrast to the rounded outlines of the face.  My first reaction was that I might like the image better without this “disturbance,” but now I’m no longer sure.  The eye and the hair-piece are the only ares of the image with tonal detail, thus striking a great balance.

And then there is the final, dare I say genius, detail — the dark vertical line that divides the face into two halves.  To me it is this division that unifies the image.  It divides between light and dark, between living and lifeless, between a person and a mask.  And thus it unifies all important elements of the Shadow Portrait.

I’d love to know if the image was previsualized this way or if just “happened.”  But in the end what does it matter?  Only the final result matters, and the final result is a superbly composed and masterfully implemented image that I can look at day after day.

I wonder if I could somehow purchase a Shadow Portrait print.  I’d love for it to be the first original piece of art that I might own…

One thought on “Critique of Shadow Portrait by Karin Székessy”